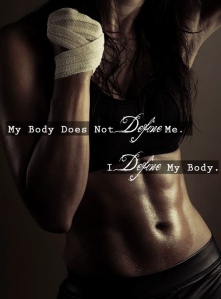 As a fitness professional and avid worker-outer, I find myself drawn to fitspiration. It’s hard to resist. Super witty quotes about not giving up paired with hot bodies – yep, I want every last image for my fitness Pinterest board.

Do I want to look like the women in those pictures? Yep.

Will I ever, regardless of the fitness regimen and nutrition plan I follow, look like these women? Nope.

It’s ok even if society tells me it’s not.

It’s ok even if another other woman has the goal of looking like that.

When I look at fitspo and then I look at myself, though, it is REALLY hard to believe that it’s ok to be me. It’s REALLY hard not to compare myself to these super lean, six pack abs-having, big-boobs-even-though-they-appear-to-have-less-than-five percent-body fat-anywhere-else-on-their- bodies images. In the end, the message seems clear: You’re not good enough unless you look like this.

You don’t have enough cleavage,

Your hair and make up never look this good when you’re all dolled up, let alone when you’re working out.

Now, you can argue that I’ve body image issues and so my view is skewed and I’d agree. But I ask you to really look at all the fitspo out there and tell me it doesn’t perpetuate the belief that  the goal of every woman who works out and eats “well” (insert “clean” or ” on plan” if you so desire) is to look like this:

The caption alone makes me a little nauseous.

That’s why it “works,” though, right? It plays on our insecurities. It sells us an image of what we’ve been told for a lifetime is the “ideal.”

Her tiny, is-that-a-toddler’s-tank top-top says the right thing. It says, “Let’s celebrate strength, not size.” Though, it could be argued that it also says, “Strong is better than skinny.” That you no longer make the cut by just being skinny. Now you need to look strong, too.

You should have visible abs and a clear thigh gap.

And also be tan.

And also wear next to nothing to show all of that off.

I am not an expert in the societal pressures put upon women.

If you are a woman reading this, you’re probably an expert, too. What I mean though, is that I don’t have 100 studies to back up my thoughts. These are my ever changing, ever evolving opinions and I write this to help myself figure it all out just as much as I write it for the four of you other than my mother who read my blather. Well, I write it for my mother, too. Read on, Ginzo, read on!

I believe that we don’t have to be at war with our bodies and that maybe fitspo, as it is now, is more harmful than helpful to improving how women see themselves. Why is it less motivating to see a 5’3″, 165lb woman in these memes? My assumption is that it is less motivating because we never see it. It must not “work” the right way, right?

It works for me. This is a video a client of mine shared on my FB page and I have to say, I find it extremely motivating.

I think comparing ourselves to the frequently airbrushed, oiled up images in fitspo is doing women everywhere a disservice. Women of all shapes and sizes are getting it done in the gym or pool or roads…and that is a far more positive message than, “Look like this because it’s the best way to look.”

I say this not to take away from the incredibly lean and a super fit “looking” women out there. Go on with your bad selves!! Good for you! I know plenty of women who have the “perfect” body. Some of them work really hard for it. Some of them don’t. Either way, it’s all good! But I wonder what they would say if you asked them how they felt about their bodies. Would they see them as perfect? I wonder…

So for all you ladies out there (guys too!) who are working on their fitness goals and struggling to love the bodies they are in, I’ll leave you with the video below. You’ve probably seen it. You’ve probably “liked” it. Now I ask you to believe it.

What do you think about fitspo?

Would you be motivated by pictures of “regular” looking women, too?

Do you find yourself trying to live up to “the ideal”?

You are perfect as you are. It's time to let your bright light shine in this world!

Can You Stay For Dinner?
Go Kaleo
Jessi Kneeland